The Truth About Derek Hough And Shannon Elizabeths Relationship

“Dancing with the Stars” wasn’t exactly created as a vehicle for developing lasting love stories, but over the years, it’s done just that. Professional dancers and their celebrity partners spend a lot of time together rehearsing, and at times, the chemistry created on the dance floor is so strong it continues in real life. Quite some time ago, that was the case for Derek Hough and Shannon Elizabeth, and there have been a few other couples since their romance too.

Sometimes, the “Dancing with the Stars” romances that developed were hot-and-heavy initially but fizzled quickly once the show was over. Fans may remember Karina Smirnoff and Mario Lopez, for example, or Mark Ballas and Sabrina Bryan. Both pairs dated for a while but moved on to other partners eventually.

On the other hand, one couple married after partnering on “DWTS,” and another got engaged and raises a child together. As People detailed, Kym Johnson and “Shark Tank’s” Robert Herjavec quickly fell for one another during Season 20. They wed in 2016 and have since welcomed twins, Hudson and Haven. “DWTS” pro Artem Chigvintsev also got close to his partner, Nikki Bella, when they were paired during Season 25. At the time, however, she was with John Cena (per Us Weekly). That relationship ended months later and during the spring of 2019, Nikki and Artem went public with their romance. Their son Matteo was born in July 2020 and they are currently engaged. But back to Derek and Shannon …

Sparks flew on the dance floor 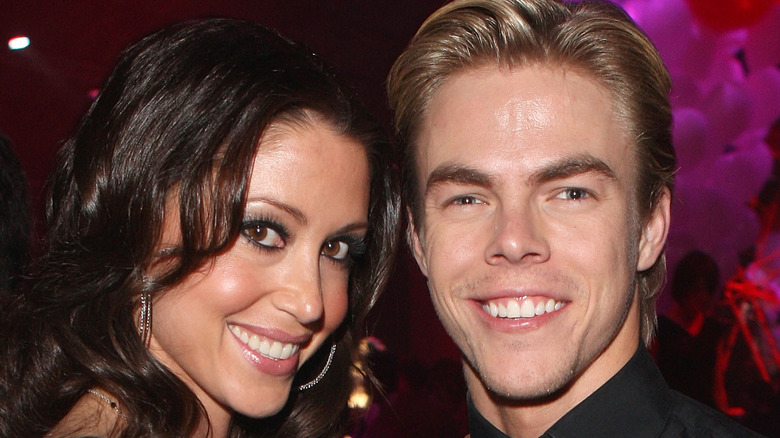 Back on Season 6 of “Dancing with the Stars,” pro Derek Hough was partnered with “American Pie” star Shannon Elizabeth. As their season debuted in 2008, he admitted, “when I first met Shannon, I just thought she was gorgeous.” The duo did their best to make it to the finale, but they were eliminated in Week 7. The couple started dating, however, as they were still competing, but they tried to keep it somewhat under wraps.

At the time, the Chicago Tribune noted they’d been photographed sharing a kiss at one point. Another time, he was caught during a broadcast with lipstick on his face ostensibly from her kisses. After their “DWTS” elimination, they called in to “The Billy Bush Show” and as Bush noted, their romance was one of the worst-kept secrets out there. Despite their 12-year age difference — she was 34 and he was 22 at the time — the pair dated for some time after their dancing adventure.

During his chat, Bush mentioned there was talk of developing a reality television show focused on the duo. “You know what, it’s a possibility, with the high drama surrounding us, I think it’d be pretty interesting,” Derek admitted. At the same time, he held back on confirming a romance. He noted they were “spending time with each other” and would see what happened. They dated for about a year, but as People noted, in August 2009, they revealed on Twitter they’d split. 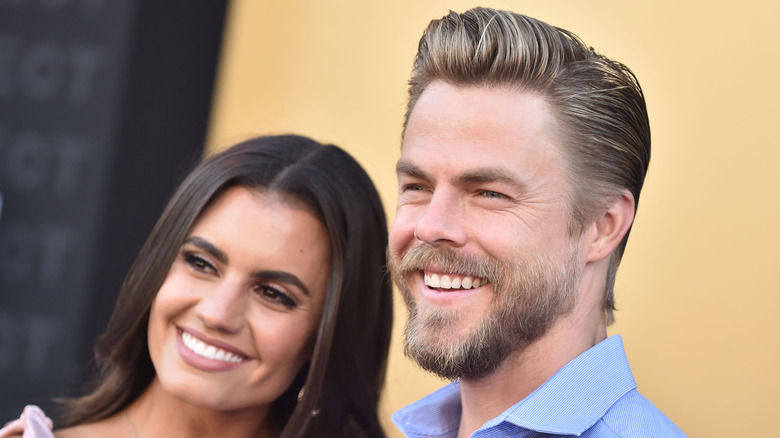 After splitting from Shannon Elizabeth, “Dancing with the Stars” pro Derek Hough was linked to a few other dance partners and Hollywood celebrities (per Bustle). In 2015, he started dating Hayley Erbert, detailed ET Online. She was a dancer on the “MOVE Life on Tour” show he did with sister Julianne Hough in 2014, noted Hollywood Life, and she’d previously competed on “So You Think You Can Dance.” Despite the 10-year age difference, the two clicked and they’ve been together ever since. In a 2018 Instagram birthday tribute, he wrote she “reshaped my life completely” and “I am a better version of myself because of you.”

As for Elizabeth, she’s seemingly stayed mostly single since her split from Derek. The Daily Mail noted she dated Russell Simmons for about a year after they first connected in 2014. It doesn’t appear she’s had any other high-profile romantic relationships since then. Her IMDb page lists a handful of acting roles she’s had over the past few years, but she’s primarily focused on her advocacy projects. The “American Pie” star is hands-on with the Shannon Elizabeth Foundation and the “Art of Conservation” podcast, often spending her time in South Africa as she passionately works to protect wildlife. And so it goes.