Meghan McCain is feeling very confident that Republicans will take control of Congress when midterm elections roll around. And as such, she’s imploring Nancy Pelosi to try harder to work with Minority Leader Kevin McCarthy.

On Thursday’s episode of “The View,” the panel of hosts kicked things off with a discussion about Pelosi’s choice to reject two of McCarthy’s picks for the committee being created to investigate the events of the Jan. 6 insurrection. And though McCain noted that McCarthy should’ve acted “in good faith” and “put someone that was less MAGA on the committee,” she admitted that she thinks there have been no good choices made on either side.

McCain then added that regardless of the committee, she thinks Nancy Pelosi should be trying to extend an olive branch across the aisle. 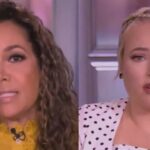 “Nancy Pelosi better start getting something done with the other side, because her time in power is coming to an end fast and furiously,” McCain said. “More than likely — I would bet literally my life on it — Republicans are gonna take over Congress in the midterms, and Kevin McCarthy will be the new speaker. These two people have to learn how to work together.”

She continued that those on Capitol Hill “need to start acting like adults and not pathetic bureaucrats” to get things done.

“I think this is why Americans are so disgusted and overwhelmed with the vast majority of what happens on Capitol Hill,” McCain noted.

You can watch her full comments in the video above.