‘The Woman in the Window’ Trailer: Amy Adams’ Long-Delayed Thriller Aims to Be Netflix’s Next Big Hit

Last summer, the streaming giant picked up the film, which was initially set up at Fox 2000 and shelved after Disney completed its acquisition of Fox. The film was originally slated for an October 2019 awards season release, was then moved to May 15 of 2020, before getting yanked from the calendar entirely.

While the film was made before the pandemic began, its single setting seems poised to strike a chord with its audience. The majority of the film’s action takes place inside Anna’s dim brownstone, where she spends her time drinking wine and watching old movies, and the claustrophobic nature of her situation will likely add a new level of anxiety to viewers who have similarly spent considerable time indoors in recent months. Wright and his team built the brownstone in a studio, so while it’s not a real location, it certainly feels like one.

During a virtual press preview event held today, Adams said she was attracted to the project because it offered her something new, allowing her to delve into the kind of “psychological thrillers [she’s enjoyed] throughout the years.” The actress also noted that the character of Anna is a rich one, someone who is “struggling with so much darkness, and there’s a lot of shame, a lot of secrets,” which tied in nicely with Wright’s “really interesting approach to the thriller.” 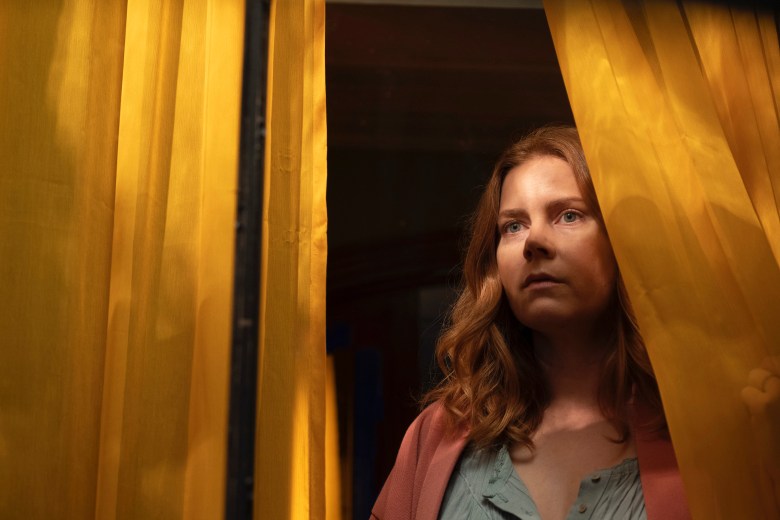 “The Woman in the Window”

Co-star and lauded playwright Letts adapted the screenplay from the bestselling novel of the same name (related: Finn’s real identity is also the stuff of tangled narratives, as this 2019 New Yorker profile demonstrates), though The Hollywood Reporter recently shared that Tony Gilroy was brought in to rewrite a few scenes after the film tested poorly with audiences.

Earlier this year, Wright addressed rumors of rewrites and reshoots with Entertainment Weekly, noting that “there were some plot points that people found a bit confusing — I would say possibly too opaque maybe.” He added, “So we had to go back and clarify certain points, but I think also we tried to make sure we didn’t oversimplify anything and make things too clear. There’s an enjoyment in not knowing what’s going on, but at the same time, you have to give the audience something to hold on to.”

“The Woman in the Window” will launch on Netflix on May 14. Check out the latest trailer for the film below.