This Morning fans outraged by Phillip and Holly’s apology

Twitter was in uproar over the weekend after snaps of ITV presenters Phillip Schofield and Holly Willoughby at the front of the queue to pay respect to the Queen in Westminster Hall emerged. Many accused This Morning’s main presenters of cutting in line, but, on Tuesday morning’s broadcast, Holly maintained they were moved to the front for reporting purposes.

Viewers were left unimpressed by Holly’s “half-hearted” explanation for the presenters’ queue-jumping.

In their Tuesday report, Holly explained: “Like hundreds of accredited broadcasters and journalists, we were given official permission to access the hall.

“It was strictly for the purposes of reporting on the event for millions of people in the UK who haven’t been able to visit Westminster in person.

“The rules were we would be quickly escorted around the edges to a platform at the back.” 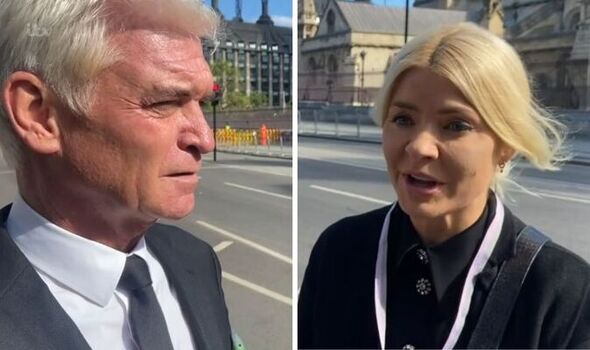 “In contrast, those paying respects walked around a carpeted area beside the coffin and were given time to pause.

“None of the journalists or broadcasters there took anyone’s place in the queue and no one passed by the Queen.

“We, of course, respected those rules, however, we realise it may have looked like something else. Therefore, (we) totally understand the reaction. Please know, that we would never jump a queue.”

Despite their apology, fans watching on Tuesday were still unhappy with the explanation given.

@Neiltc100 fumed: “Would you even call that an apology, half-a***d voice over #ThisMorning.”

@mangochutneyyum tweeted: “And there it is..the excuse and weak a** apology done via a practiced voiceover, how many takes Holly?

“There was literally zero reason for them to be in that room, this whole segment is garbage television #ThisMorning #queuejumpers.” (Sic)

This Morning had addressed the uproar caused by Holly and Phillip’s presence at the historic event previous in a statement to its Instagram page.

In a statement, it defended the hosts by saying: “Hello everyone, we would like to clarify something. We asked Phillip and Holly to be part of a film for this Tuesday’s programme.

“They did not jump the queue, have VIP access or file past the Queen lying in state – but instead were there in a professional capacity as part of the world’s media to report on the event.”