This Morning viewers furious at professor who says breakfast makes you gain weight, fast for 14 hours and avoid snacks

THIS Morning viewers raged at a professor who for giving "damaging" advice about how to lose weight.

Tim Spector claimed breakfast makes you gain weight and told viewers they should fast for 14 hours and avoid healthy snacks. 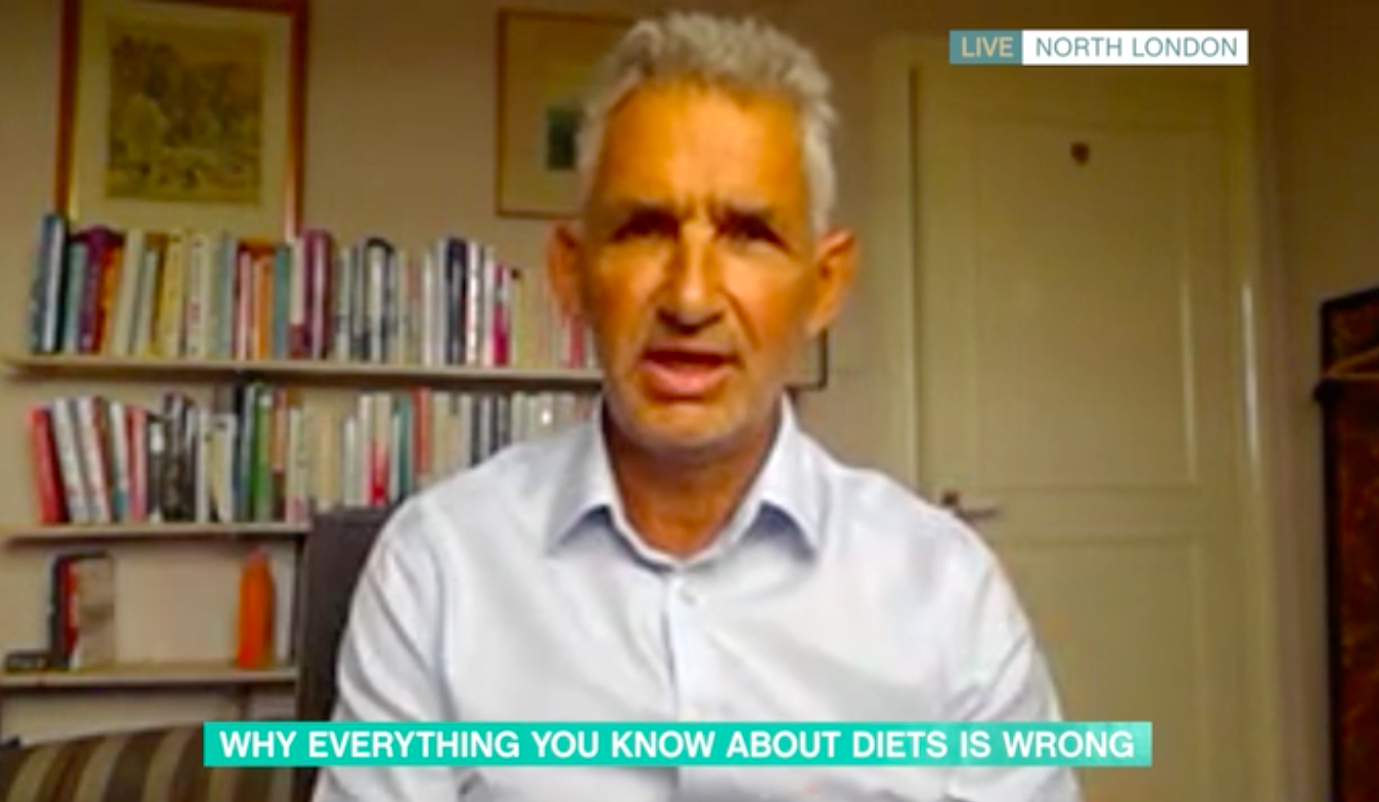 He's written a book called Why everything you know about dieting is wrong to "correct the falsehoods" that have been pushed onto people for years.

Tim told viewers: "It's important people know the truth about what we're eating and correct the myths that face us every day when we go to the supermarket.

"I love breakfast, but for many people it actually makes them put on weight.

"About half the population would probably do very well if they skipped breakfast. 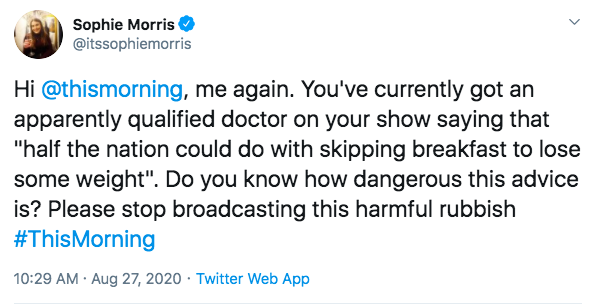 "It's been told it's the most important meal of the day for the last 100 years by breakfast manufactorers. It simply isn't true.

"If you have the same amount of food broken down into two meals, not three, most people will be better off and healthier."

It enfuriated viewers, with one asking: "STOP WITH UNHEALTHY DAMAGING PIECES ABOUT FOOD. Please. Restrictive eating = “breakfast is bad” should not be glorified on television. Stop it."

Another said: "Utter rubbish. Send children to school hungry? It depends WHAT you eat for breakfast (as well as other meals)." 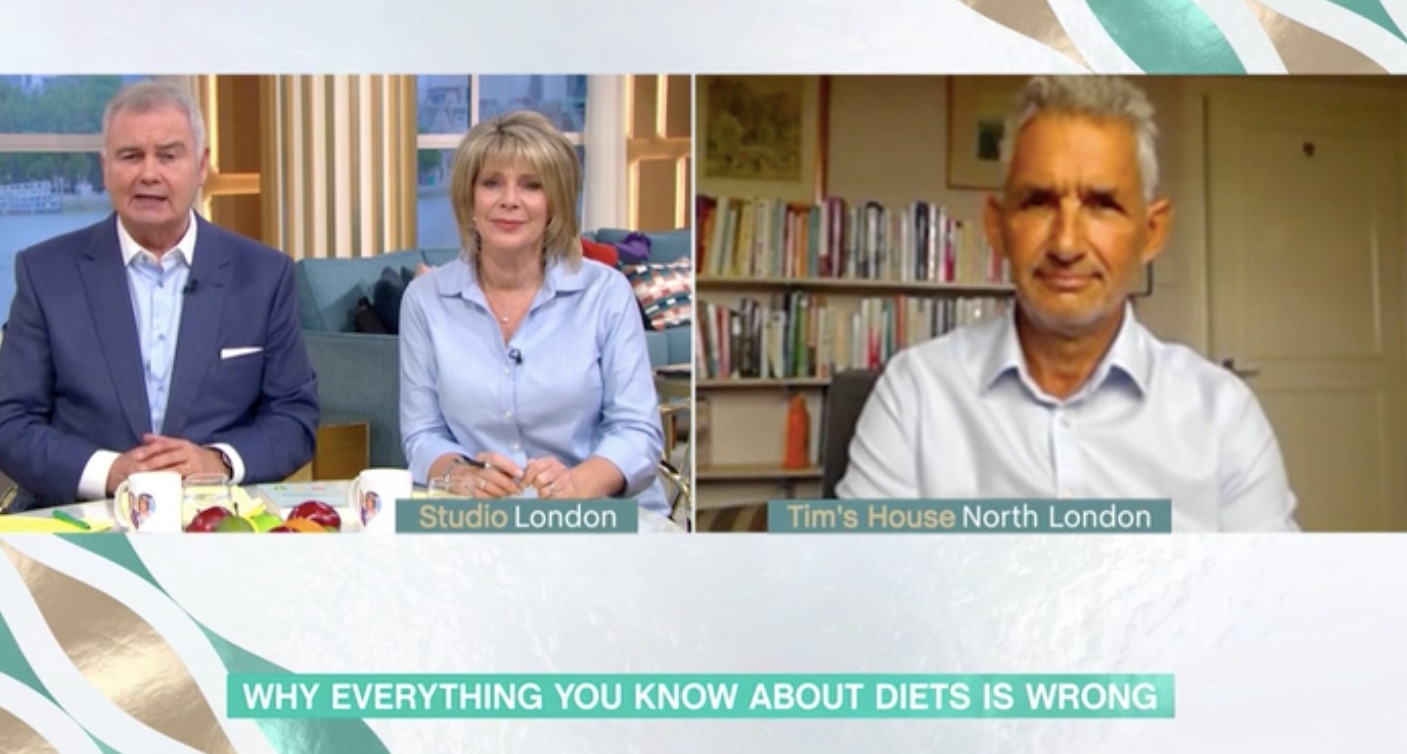 Someone else said: "Hi @thismorning, me again. You've currently got an apparently qualified doctor on your show saying that "half the nation could do with skipping breakfast to lose some weight".

"Do you know how dangerous this advice is? Please stop broadcasting this harmful rubbish #ThisMorning."

Tim also discussed the idea of "restrictive time eating" to "give your gut a rest".

He encouraged people not to eat for 14 hours.

"This goes against what the food companies want," said Tim.

"They want us to eat all of the time, but the scientific evidence shows the opposite it true.

"We should be compressing our eating time, so starting later and finishing earlier."

Tim went on to describe calorie counting as "the biggest oversell in history". 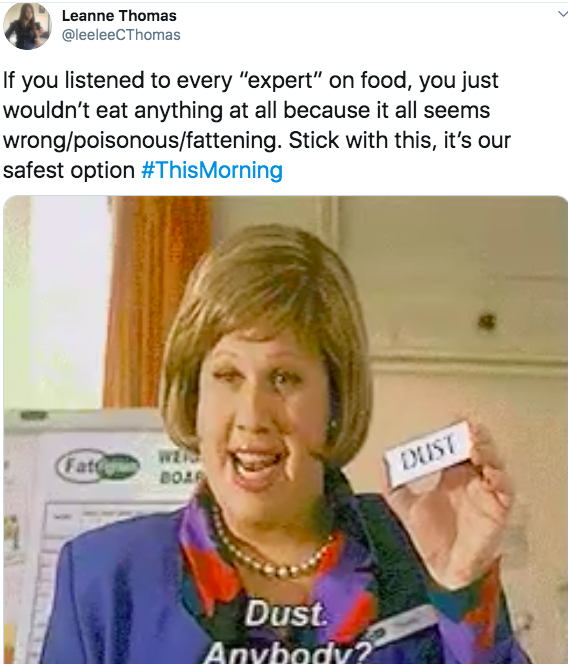 "No calorie-controlled diets have ever worked long-term," he claimed.

"You can't measure it accurately.

"Calories in doesn't equal calories out. It doesn't add up."

Ruth Langsford argued that the less calories consumed will help to lose weight.

Tim added: "The idea that women only have 2,000 calories is complete nonsense. Everyone is different and unique.

"Chips have more calories than spinach, but choosing different foods because of calories is nonsense.

"If we eat better and at the right time then we can all be much healthier and lose weight."

Tim added that there are more obese people now because of "continual snacking", adding: "You should wait, like in southern Europe, for main meals and eat those properly."

Another viewer said: "So what do you expect us to eat dust."

One added: "If you listened to every “expert” on food, you just wouldn’t eat anything at all because it all seems wrong/poisonous/fattening."

Someone else said: "Sorry, but this man is talking utter nonsense. Consuming too many calories lead to fat gain.

"Consuming fewer calories lead to fat loss. It is very much to do with calories in vs calories out. Yes, fat loss is that simple. #ThisMorning."