Ask and get a surprisingly satisfactory answer 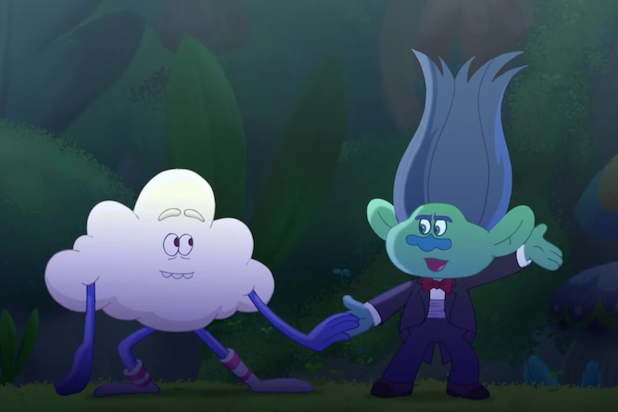 The “Trolls” movies and TV shows — like “TrollsTopia,” which premiered its second season on Thursday — are among the better kids content for adults to also sit through. With all due respect to Poppy and Smidge, much of the entertainment value comes courtesy of Branch and secondary character (at best) Cloud Guy’s bizarre relationship, with lots of the laughs emanating from the cumulus prankster.

So this reporter and father of two asked (TV) Branch, Skylar Astin, why I like Cloud Guy so much. He seemed qualified enough to answer, and Astin’s thoughtful response did not disappoint.

“I love Cloud Guy, and I love Branch and Cloud Guy together,” Astin told TheWrap. “It’s my mom’s favorite stuff. She loves the Cloud Guy-Branch episode. I think it’s just like the classic ‘odd couple.’”

He added: “And Cloud Guy gets to kind of maybe be the voice of the adults, because he’s sardonic and he doesn’t take himself too seriously, but not in the way that Poppy doesn’t take herself too seriously. I think there’s a little bit more edge with Cloud Guy and he enjoys the catharsis of getting a rise out of someone. And I think that that’s more of an adult way of thinking. So I could see why adults, for sure, respond a lot to that character.”

While we had Astin, we also asked him about (vocally) inhabiting the role that Justin Timberlake played in the movies, and if Branch and Poppy qualify as a will they/won’t they couple. Read that portion of our interview here.

Branch’s rival and our favorite, Cloud Guy, is voiced by Walt Dohrn, who co-directed the first “Trolls” movie, wrote on “Trolls: The Beat Goes On!” and directed “Trolls World Tour.”

“So maybe that’s also why you respond,” Astin continued. “He’s not just a voice actor out there. He maybe, when he was writing it, was like, ‘I understand who this guy is and what this guy is so much, I should just do the voice of it.’ Maybe he did the scratch recordings and then when they were out to cast it, they’re like, ‘Ah, no one is quite threading that needle that Walt does.’”

Astin said he’d be “so in on” a Branch-Cloud Guy spinoff. Us too, Skylar, us too.

That jogged a happy memory for Astin, who also stars in “Zoey’s Extraordinary Playlist” on NBC.

“Oh my God, this is so funny because it was years ago but I’m just remembering it now. We were in the booth together doing all this comedy and improv, and we kept talking about doing a spinoff. And I think at the time, it was more like, you and I as people should do a spinoff of a show called ‘Bad Boys’ or something where it’s these kinds of characters. Because I don’t know I.P.-wise if we’d be able to do Branch and Cloud Guy — that seems like there would have to be so many approvals from DreamWorks and things to make that happen. So I think at the time, we were like, ‘This attitude and this comedy and this contrast would make for a great spinoff. Like, what could we do here?’”

You can do anything you want here and we’ll watch. Oh yeah, and the kids too.

Both “Trolls: The Beat Goes On!” seasons can currently be found on Netflix. Those serve as the sequel series to the first “Trolls” movie and the prequel series to “Trolls World Tour.” Seasons 1 and 2 of “TrollsTopia,” which in the universe follows “World Tour,” are available on Peacock and Hulu.