Was Andor's Resort Sequence Possibly a Flashback? Let's Look at the Facts…

A pivotal sequence in the latest episode of Disney+’s Andor has left some fans debating if it was in fact a stealth flashback, and not an update on the title character’s whereabouts.

In the Oct. 19 episode of the Rogue One: A Star Wars Story prequel series, Cassian returned home to Ferrix after the Aldhani heist, to whisk his mother Maarva and droid B2EMO off to a better life away from the stormtroopers now patrolling Rix Road. Maarva, though, asserted her wish to stay put, ignited as she has been by the bold rebel actions on Aldhani.

The scene then switched to the ISB, where Supervisor Dedra Meero got deserved kudos from Major Partagaz for her gathering of hard data suggesting a growing rebel effort.

We then took a jarring jaunt to the beach resort Niamos, via a languid coastal flyover shot accompanied by one serious bop. There, we found Cassian (using the alias “Keef Girgo”) in the company of a new (or previous?) lady friend. Moments later, he was arrested by an overzealous shoretrooper whilst on his way to a store, and ultimately sentenced to six years for charges that normally would call for six months.

That hefty prison sentence — knowing that Andor Season 1 only covers a year, while the series as a whole spans five years — is one possible clue that we were watching a flashback, and that the Cassian we met in the first episode had already served this time. (“Clem” had told Skeen in Episode 5 that he served three years at a youth center, but he entered at age 13.)

Then again… the trumped-up sentence seems to more clearly speak to the bills that General Yularen had just told us Palpatine rushed through, which in part deem even an “indirectly related criminal act” a Class One Offense. The shoretrooper’s paranoia, accusing the barely furtive Cass of being “part of it,” also supports the “not a flashback” POV.

Yet… as TVLine reader MBWilson observed, when “Keef” is washing up in the Niamos hotel room, “notice he has no wound or scar on his left arm despite being wounded just prior to Aldhani.” 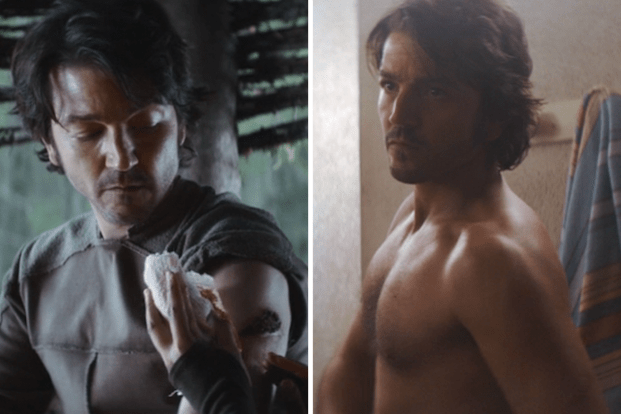 Or… can the unblemished left arm be attributed to the fact that a few thousand credits can probably get you some decent plastic surgery in a galaxy far far away, to conceal a telling scar?

Not clarifying matters is what the episode’s audio descriptor says as the action switches from the ISB to Niamos: “Elsewhere…” which could suggest a concurrent happening, although “Meanwhile….” would have been more on the nose. Later, leading out of Cassian’s sentencing, the audio descriptor says, “Now…” when turning to Syril’s story. Versus “then,” perhaps? Saying we are “back in the present” following a flashback?

That Cassian was even at a lush resort strongly suggests this took place after the raid, after he left Maarva on Ferrix. Previous episodes told us he barely had two nickels to rub together, and regularly stiffed both Bix and Ferrix’s local loan shark. How could that same guy have afforded the resort and his needy lady friend?

Plus, if Andor was “surprising” us with a This Is Us-style, stealth flashback, wouldn’t the sequence/episode have made that crystal clear before fading to black? Leaving us with a decisive “A-ha!” moment?

Me? I think this was not a flashback, and that “Keef” will somehow get sprung from prison — maybe by Vel, with plans to then terminate Luthen’s loose end. And if he first serves nine months or so, that’d help nudge the narrative deeper into the one year that Season 1 will span.

Where do you stand? Did you think Niamos was a flashback? Or was it definitely set after Cass left Ferrix? While you ponder, I leave you with that Niamos bop: