Susanna Reid and Alastair Campbell welcomed former Prime Minister Tony Blair onto Good Morning Britain today to discuss vaccine scepticism and the Labour Party’s recent failings in local elections. However, Reid shut down Blair when he discussed the stir surrounding his lockdown mullet which he sported during an appearance on ITN News last week.

Kicking off the interview, Reid introduced: “Tony Blair is calling on the Government to combat vaccine hesitancy and the confusion surrounding the risk of being vaccinated in order for the country to return to a more normal way of life.”

“But first of all, I think we should discuss something that has almost as much coverage as the vaccines, Tony, Mr Blair, I worked with you for many years.

“We’ve done many events together, I’ve always defended you, I’ve always tried my best to look after your communications and your image.

“Can you explain to me how you allowed yourself to do a televisions interview looking like Gerry Francis?” 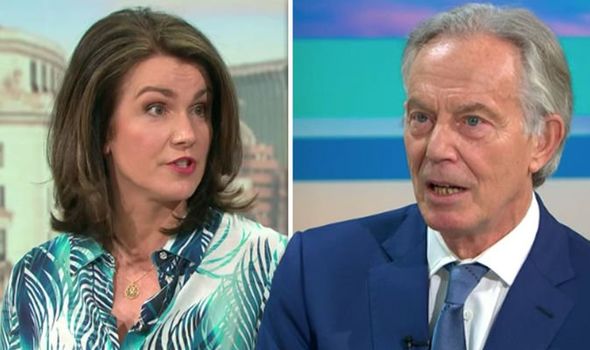 “Or Gandalf,” Reid remarked and Blair replied: “Well Gandalf is better than some of the things I’ve been called. Look it’s because of lockdown but it’s done, it’s over.”

“I’d just like to point out that interview was done after the hairdressers reopened,” Reid quipped.

“No I know but it took some time to get organised,” Blair explained.

“But the thing that is interesting and depressing about politicians is everything I’ve said about the vaccines, when I said to my people, ‘What did I receive the most traffic about this last year, which one of these topics?’ They said, ‘Well actually your hair.’”

“Welcome to being a woman in television,” Reid hit back.