‘What?’ Dan Walker snaps at Carol Kirkwood and Louise Minchin over breakfast habits

During Wednesday’s BBC Breakfast, presenters Dan Walker, Louise Minchin and Carol Kirkwood were discussing breakfast condiments and what they prefer to put on their sausage sandwiches. However, Louise’s response left Dan rather baffled and it certainly caused a stir on Twitter from viewers.

“The only other important question to ask you this morning is, sausage sandwich, red sauce or brown sauce?” Dan quizzed.

“That’s really messed with your head, hasn’t it?”

A baffled Dan replied: “What? You’re a maverick.

“My grandfather used to have marmalade with bacon, what so just like normal marmalade?” 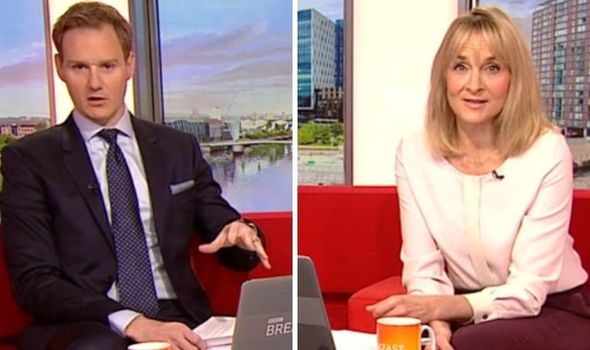 Dan laughed as he barked at the pair: “What’s wrong with bog-standard ketchup? You come in here with your weird foody ways, you lot.”

The segment left viewers divided and while some were open to the idea others weren’t so convinced.

“Marmalade on a sausage sandwich!!!!! Really?” one tweeted.

Another confused viewer said: “Nooo! Can’t do sweet and savoury – I can’t even, as a proud Yorkshire woman, do Christmas/fruit cake with cheese *hangs head in shame.”

Other viewers said they would be more than happy to give marmalade and sausage sandwiches a try.

A third tweeted: “I would certainly give it a try!”

One added: “Worth a try, not much different from turkey and cranberry sauce or pork and apple sauce?”

Some viewers also shared their own bizarre food combinations, with one commenting: “Try dunking sausages in a 50/50 mix of marmalade and mayonnaise…sounds weird but honestly, it works.”