The rare instance where adding a metre to a wall isn't a comment on the global movement of people across borders, Australian Ninja Warrior has a new home in Melbourne, a new course for the insanely fit and supple to attempt, and the promise from producers that someone will actually be declared the winner even if no-one finishes it. What hasn't changed? Co-host Rebecca Maddern is very, very excited. 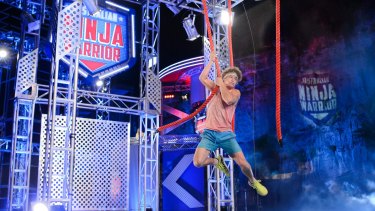 Ashlin Herbert, who recorded the fastest time in the heats, failed to complete all eight obstacles under the strict time limit.Credit:Nine

There are 35 obstacles in all, but the heats use just the first six. The semi-hysteria and worship of abdominal muscles is already at full speed. Victorian dairy farmer Bradley gets the first go, which allows colour commentator Freddie Flintoff to make an "udder one" pun. Familiarity is going to be an issue, but this is still that rare TV competition where likeability flourishes.

Persistence and an inexhaustible stream of low-target material – if you want a quick riff on ticket machines at supermarket deli counters you're in the right place – have helped Troy Kinne keep his head above water in Australian comedy and make the move from afterthought digital channel to headline broadcaster.

This encore screening of the pilot that got Kinne Tonight a season on Channel Ten is illustrative of what bows he and his team do and don't have. His main target remains the dickhead, a species that Kinne himself does a pretty good take on, starting with some coffee order satire, and the pacing here is so urgent that you're never sure whether it's from confidence in the material or self-doubt about allowing a pause to take hold. Take note of Kinne's associate Natalie Tran, who has some seditious potential.

After five seasons that slowly but surely took the cliches of the romantic-comedy sitcom to sardonic pieces, but then actually put them back together as a statement on accepting love as a difficult reality instead of pretending it's a lofty virtue, You're the Worst concludes with Gretchen (Aya Cash) and Jimmy (Chris Geere) as together as they are apart, and still capable of expressing their flaws through a scabrous insult.

Last week's penultimate episode had a reckoning between Jimmy and his friend, military veteran Edgar (Desmin Borges), which adds to the stakes here, but the lessons of Stephen Falk's successful series will hopefully endure: a sharp tongue and a few flaws shouldn't limit a character's potential.