It’s the week before Eddie Redmayne’s latest film, Tobias Lindholm’s “The Good Nurse,” hits select theaters after a robust festival run. The Oscar winner is in an SUV, zipping from one engagement to the next (no, he is not driving; yes, he’s delighted to discover that the car itself has wifi, which makes Zooming possible). He’s been everywhere lately, Toronto to New York, Mill Valley to Newport Beach, Los Angeles to London. He’s all smiles.

And, hilariously, the genial Brit somehow lights up even more when asked why he took on the role of Charles Cullen, potentially America’s most prolific serial killer (29 confirmed victims, with a possibility of 400 total), for the Netflix drama.

Me: “This is so not an Eddie Redmayne role. You’re a serial killer!” Redmayne: “Oh, that’s like the loveliest thing you could possibly say!”

He continued: “I think the joy of what I do, the job that I do, is getting to push yourself in directions that one’s self doesn’t expect, and hopefully also the people who watch your work don’t expect. I read this script, I knew nothing about the story, and what unfolded for me was this sort of box-less, undefinable piece. It felt unlike anything I’d read before. On one hand, it was a true-crime piece, but it didn’t have any of the salacious qualities or the fetishization that I sometimes attribute to that genre. It felt like a superhero story, a real life superhero story about what this woman was able to accomplish.”

How does that work? One possibility: Redmayne maintains a very healthy outlook on all his work. Asked about the Wachowskis’ infamous misfire “Jupiter Ascending” — which co-star Mila Kunis recently admitted she knew would be “a flop” after its budget was snipped — and the actor can’t help but laugh. “It lives on in meme history,” Redmayne said, likely referring to his own Razzie Award-winning role as “Balem Abrasax” in the inscrutable 2015 fantasy picture. 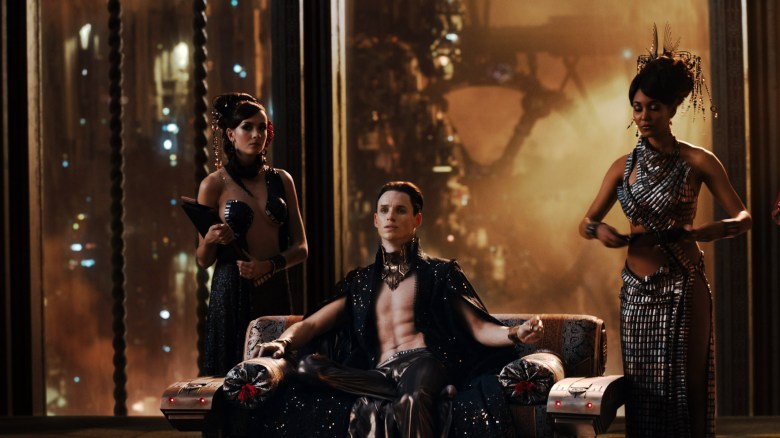 Still, his memories are only good, if a bit weird. “That world was so beyond my level of imagination,” he said. “I just wanted to go and swim in [the Wachowskis’] imaginations. I had sort of no idea what I was doing, I didn’t know anything about the budget, but I had a really enjoyable time making it. But I also wasn’t in it that much, and I just remember that the character I was playing was incredibly vain and was squishing up humans in order to make them into serum to live longer, so the thing what was most important was that I had a six-pack and a spray tan. So there was a lot of sit-ups involved and me clenching my attempt at abs whilst speaking in a strange voice.”

As for what’s next for the embattled “Fantastic Beasts” franchise — initially announced as a five-film outing, although three films in, controversy is up and box office is down for the “Harry Potter” spinoff series — Redmayne was less sure. Asked if he knew any information about a fourth film, he said, “I don’t. It’s more a question for J. K. Rowling and David Yates and Warners, but I don’t know, I’m afraid. I can’t add to that,” he said, though he’d likely enjoying getting back into character as “magizoologist” Newt Scamander after the Charles Cullen gig. “I love playing Newt, he’s a sweet man,” he added.

So, about Charles Cullen. Over the course of his two-decade career as a nurse, Cullen is believed to have killed as many as 400 patients — mostly by tampering with IV bags and filling them with lethal doses of digoxin, insulin, and epinephrine. After fellow nurse Amy Loughren (Jessica Chastain) helped bring him to justice in 2003, he was charged with 29 murders and sentenced to 11 consecutive life sentences. Lindholm’s film never gives a reason for Cullen’s crimes. Neither did Cullen. That was intriguing.

“I had that feeling when I read the script of, ‘Can I play this person without the why?’ But then I kind of thought on that and ultimately realized that the why and knowing the why is our need as human beings to feel safe,” Redmayne said. “As in, if we answered why Charlie Cullen did this, then we would be able to other him and go, ‘Oh, he did it for this reason, and that’s monstrous and we would never do that, so we’re safe.’ Whereas actually, that’s not how the world works and that’s not what he did.” 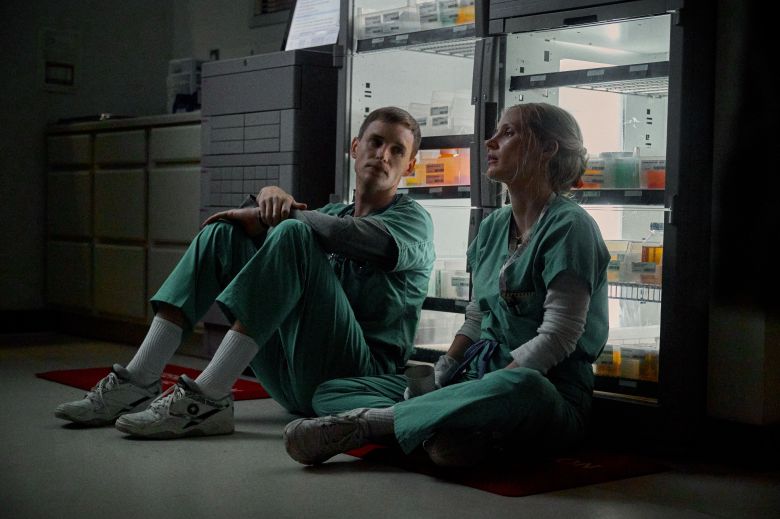 While the film doesn’t delve into Cullen’s backstory, Graeber’s book includes the killer’s “intricate” biography. Redmayne reeled off some of the more horrifying revelations of Graeber’s book with ease, like “he first tried to kill himself and someone else at age seven” or that, while Cullen passed all the psychiatric tests to get into the Navy, at one point during his service “he was found with his finger over the Poseidon missiles on a submarine.”

“How this guy was ever allowed near vulnerable people is one of the shocking questions,” Redmayne said. “But it also meant that as an actor, I had all of that research there.” Redmayne worked closely with Graeber, who provided the actor and the rest of the team copious audio transcripts from his many interviews with Cullen. Redmayne studied them.

“Eddie is a delightful, very handsome, delightful, playful human,” screenwriter Wilson-Cairns told IndieWire during a recent interview, so when he slipped into the role of Charlie Cullen, the writer was blown away by the ways he seemed to change right in front of her. “The first time in rehearsals that I saw him turn it on, I was totally bewildered, because Eddie Redmayne stopped existing and Charles Cullen was there in the room,” she said. “I’d spent 10 years listening to this guy, reading about this guy, writing this guy, being in this man’s head, and it was really startling.”

Loughren, who was on set for a few days of filming, was also struck by Redmayne’s ability to tap into Cullen. “[Loughren] actually took me aside after watching Eddie do a take and she said Charlie was here. She was like, ‘That was Charlie, I can’t get over it,’” Wilson-Cairns said. “She was staggered by it. What he did was profound. Eddie Redmayne acts with every molecule of his being, and probably most of the molecules around him as well. It’s insane. And what he gives in this film is more than I could ever have dreamed of when I was writing it.”

Redmayne is no stranger to playing real people or telling true-life tales — he still remembers the day Stephen Hawking showed up on the set of “The Theory of Everything,” a moment in which “all my bodily functions sort of failed, because you instantly feel a fraud” — but he’s learned how to navigate that. “It’s not documentary, it’s not the truth,” he said. “It’s as close to the truth as you can get it with the acknowledgement that this is an interpretation and so you have to, when you’re playing real people, kind of be kind-ish to yourself.”

For the actor, that includes a lot of preparation, by way of a process he knows doesn’t appeal to everyone or work for every other performer.

“I’m not an actor that stays in character,” he said. “One of the things I love about my job is working with people with completely different processes. My particular process is I have to do all the homework. I need a long runway, I need a long time for prep. … You want those things to be embedded in who the character is by the time I arrive on set.” 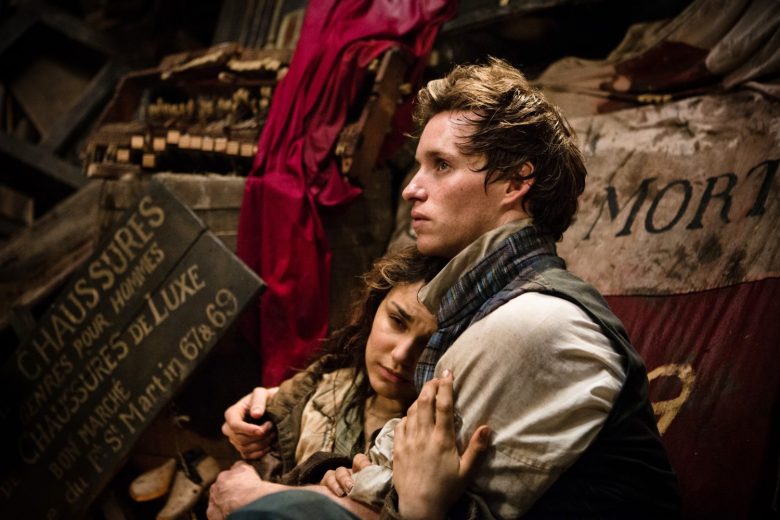 Redmayne was eager to pair with Chastain, a long-time friend whom he first met while he was on the festival and awards circuits for “Les Misérables” in 2012 (Chastain was stumping for her “Zero Dark Thirty,” which ultimately earned the actress her second Oscar nomination). “We had these years of what I describe as the most sort of Hollywood way that a friendship can work, which is that there this person who you meet on the couch of ‘The James Corden Show’ or on the red carpet of the Oscars or something, and it’s totally real and you really like this human being, but you meet dressed in glad rags and clad in jewelry,” he said with a laugh.

He admitted that, despite years of wanting to work together, he knows it can be “complicated to work with your pals.” But Chastain didn’t disappoint, on screen or off. “We were moving to New York with my family, and Jessica and her husband and actually [her close friend] Jeremy Strong helped find us places to live, someone to help do babysitting, all of that,” the actor said. “This was an intense story, but we wanted to make sure that it also our lives that we’re living [when not shooting the film]. Our families hung out, and it was a very special time actually, despite the intensity of what’s on screen.”

Redmayne’s wife and children were with him for most of the film’s shoot, only heading back to London when Redmayne had about three weeks left of shooting. Those were, incidentally, some of the most challenging weeks, including shooting a final act scene in which Charlie is caught, arrested, and interrogated. He also snaps, finally breaks, goes absolutely wild in a key scene alongside Chastain. They shot the sequence multiple times, which sees Redmayne ratcheting up both his emotional and physical intensity.

“He’s in such a broken place at that point and it’s something, a technique that I first actually was shown to by” — Redmayne pauses to offer a chuckle as he rolls out the big guns — “clanging name-drop, Robert De Niro, when I did a film called ‘The Good Shepherd’ years ago. When I worked with De Niro, he would keep the camera rolling on emotional scenes and you would do the scene, and the second the scene finished, rather than call cut, he would encourage you to bottle the emotion and start back in again with the scene.” 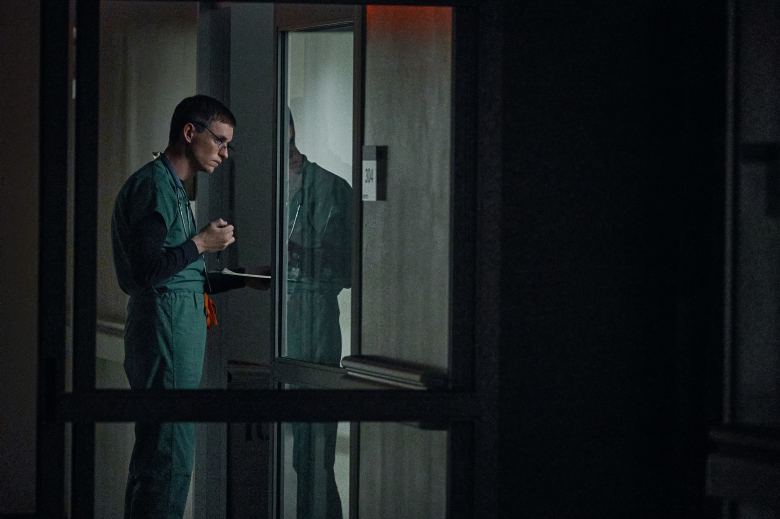 Redmayne said he’s used that technique in the years since, like during the “Empty Chairs and Empty Tables” scene in “Les Misérables.” It proved useful again for “The Good Nurse.” “That can only work in scenes where the character is in a high-stakes emotional place at the beginning of the scene,” he said. “And that’s what I did here. Sometimes, I think also that’s what you do on stage. You do it night after night and what your entire body creates as a consequence of reaching for extremes, that ends up being helpful when you go back into takes.”

Redmayne is happy not to be a Method actor, but he’s still enthralled by finding the lines between performer and character.

“I can remember once working with Julianne Moore, it was early on in my career and we’d be having a chat with the cameras about to roll and she’d be talking about ‘The Jonathan Ross Show’ and this time when she went on or something and then without me realizing, she had gone straight into character and I was still being Eddie,” Redmayne said. “I don’t want to speak for Julie, but I felt like part of her process was distracting herself. Everyone has different ways of doing it. I sort of have to be slightly in the zone, but I definitely have to break out of it.”

He paused to chuckle again. “Also, I have young children and my wife would not want to live with me coming home as a serial killer. That would be disastrous!”